As you may have read in my About Me section, running is a passion of mine and is a big part of my life. I ran my first half marathon in June 2011, and ever since then, I’ve been hooked. I’ve now run 17 half marathons and 9 full marathons. I recently qualified for the Boston Marathon and will be running it in April 2018.

I can say, without a doubt, marathon running has been life changing. I have yet to experience a feeling that compares to crossing that finish line after hours of strenuous physical and mental activity. Pushing through the discomfort and pain (or should I say agony…), the intense focus and the mental dialogue that goes through a person’s brain during this experience, is something that’s hard to put into words. Going through those experiences has taught me that I can do anything I set my mind to. This has translated into so many positive things in my life, including my career as a dietitian. As I build my dream job, I’m learning that no goal is too difficult to accomplish as long as I put in the hard work.

Fueling Before, During and After a Run

With 9 full marathons under my belt, I’ve learned a lot about properly fueling before, during and after a run. There is certainly some science behind fueling and which types of fuel are best, but fueling is also highly individualized as I’ve learned. Below I’ll share with you what’s worked for me so far.

The night before a long run or race:

The morning of a long run or race:

*The story on carbohydrate loading: Carbohydrate loading is a strategy used to store as much glycogen as possible by eating a larger than normal amount of carbs a few days leading up to a race or long run. I’ve carb-loaded many times and have found that really it was an excuse to eat more carbs: breads, muffins, pasta, cookies and all of those foods I love so much. The reality is that I don’t feel it helped my performance at all, considering that whole grain/high fibre carbs are a large part of what I eat anyways. I would suggest for ~3 days leading up to a marathon or very long run (>30 km) having 60-70% of your diet carbs. This is most important for people who eat a reduced carb diet, in which case they would have lower glycogen stores that they need to build up.

Energy Gels: are syrupy or chewy (depending on the type) concentrated solutions of carbohydrate which either don’t require chewing, or require a very minimal amount of chewing. For their small size they contain a large amount of energy (sugar) and electrolytes. Electrolytes are important during endurance exercise because normal body functions, not to mention performance (leg cramping), are compromised if adequate levels of electrolytes are not present. This is especially important in the heat and/or when exercise goes beyond the two-hour mark. They’re indigestible without water, so be sure to drink water right after.

Energy Drinks: are also made with easily digestible carbs and electrolytes to speed up rehydration. They’re best to have during very long runs, along with water and gels and aren’t neccessary for short runs, unless the temperature is very hot. Some people find that just gels and water are sufficient, however in my experience, in the actual race, by body needs the extra electrolytes from the energy drinks, otherwise the muscles in my legs cease up. You can also buy electrolyte drinks without the carbohydrate (sugar). I’m about to try the Nuun electrolyte tabs (pictured above). Each tab contains sodium, potassium, magnesium, calcium, les than 1 g of carbs, and no sugar.

I’d recommend refueling with energy gels on runs longer than 45 minutes. When I do my long runs, I refuel every 45 minutes for the entire run. So, if I’m running for 2.5 hours, I’ll have a gel at 45 minutes, 1.5 hours and 2.25 hours. What works for me is having 30 g of energy every time I fuel. The nutrtion facts table will tell you how many grams of carb there are in 1 package.

Also be sure to drink water along with the gels, as the water is needed to help digest the gels. Also, avoid solid foods during exercise, even if you’re starving. Your stomachwill likely feel uncomfortable as a result, and your body cannot store the food as glycogen quickly enough to use right away, like it does from the gels.

*My personal favourite is the Clif Shot Bloks because they’re chewy. I find the liquid gels to have a very unappealing texture.

When you drink water and/or energy drinks during a run, sip small amounts often, instead of gulping. This will help you stomach stay settled. Aim for 1 small cup of liquid for every 15-20 minutes of running.

Eating as soon as possible (withing 30 minutes) after a run will help to minimize stiffness and soreness by helping your muscles to recover quickly. There are many special recovery drinks, bars and supplements available, but It’s just as easy, cheaper, and healthier to recover with real/whole food. A bagel with peanut butter, or a bowl of cereal with milk and a banana are perfect recovery foods.

To restore fluid balance, your body needs to take in twice as much water as you lose through sweat. For 2-3 hours after a run, drink more than you normally would. 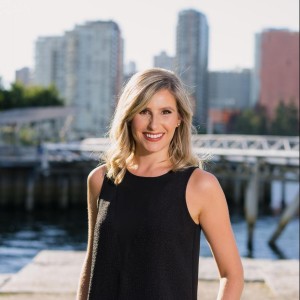 Welcome! I’m Carolyn, a Vancouver based registered dietitian, certified diabetes educator, marathon runner and foodie. My passion is creating simple and nourishing recipes to share with you! I hope you enjoy looking around.

The Fennel Countdown to Your Summer BBQ